I just returned from my annual ski vacation in Vail, Colorado. Getting significant ski time in only once a year does little to help me significantly develop my skiing ability. While my style is greatly improved from years ago and my old ski buddies (Mike, Gil, and Brian) might not recognize it, I still carry some of the same bad habits I had back then.

Like many financial types, I tend to be conservative by nature and that shows up in my skiing style. I hang back a bit (sitting in the back seat is the common phrase) which means 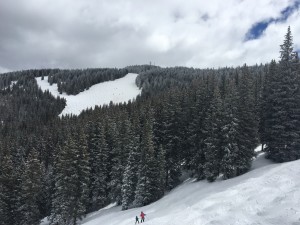 when I fall (which is fairly rare), I’m most likely to land on my back because my weight isn’t forward enough.  I’ll admit that being able to spend a week out west without a fall is more a mark of fairly conservative skiing as opposed to skiing excellence.

Why is this important? Well, maybe it’s not but I had a conversation recently about a budget and a skiing analogy came up. I was asked if the company was out over its ski tips with respect to their operating plan and budget for the upcoming year. Good skiers are balanced. Their weight is centered over the skis (both front to back and over both skis). They also attack the mountain which means they are focused downhill (on their goal) and are not bothered by small distractions (minor bumps in the snow). So while they are balanced they are also reasonably aggressive in their approach.  Being too aggressive, however, can result in failure just as easily as being too conservative.

Further, most annual financial plans should stand the test of time. They should be valid for the time frame for which they were prepared although occasionally I will recommend a mid-year reset. A few years ago, I worked with a client and we were ultimately too aggressive on revenue but also had ramped growth based expenses too aggressively. By mid-year it was pointless to continue to compare monthly results to our original plan so we created a second half plan that was more suitable. In another instance, I was working with a new client that had a disappointing profit of $1.5M in the prior year.  The plan for the next year was to double the profit to $3M.  In one of those rare instances where nearly everything breaks in your favor, we threw out the budget mid-year and refocused on $6M (and hit it).

The examples above are exceptions, however. For the most part, one should be able to progress throughout the year using the annual financial plan as a roadmap (just like the old paper kind we all used before GPS – more about that in a future newsletter).

Plans that are either too aggressive or too conservative will most likely result in failure. In one case, the company may fall so far short of its goals that it will end up operating as if it had no plan at all. In the other, it will fall short of its potential resulting in lost opportunities.

As we close out the first couple months of the year, give some thought to your 2017 plan in the context of this post. Are you out over your ski tips? Or are you hanging back so much that you’re not really giving it your all?

If your business could benefit from fractional CFO services, I would welcome the chance to speak with you.  Please give me a call at (314) 863-6637 or send an email to [email protected]

The archive of these monthly newsletters is posted at the Resources section of homza.com