Too often, people are not sufficiently persistent in their pursuit of a goal. This can manifest itself in a couple of different ways. They pursue something over a limited period of time and then give up when they fail to achieve their objective in a relatively short time frame. Perhaps they were on the right track, or perhaps not, but they just didn’t give it enough time. In other cases, they actually chase their goal for an extended period of time with one singular approach. It is not working but they continue to bang their head against the proverbial wall when they should really try some different tactics.

To achieve a goal, it’s important not only to commit to a long stretch of time (the amount of which depends upon the specific pursuit) but also to be open to a variety of approaches. If something is not working, be flexible and try something else. 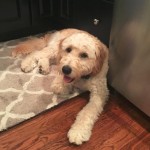 Those of you who have kids know how persistent then can be at times. My eight year old (actually now nine as I am writing this on his birthday) started to pursue his goal of owning a puppy somewhere around the age of four. We finally relented when he was nearly 8 ½ which means he spent approximately half of his life pursuing his goal. Now that’s determination.  Four years might not be sufficient time for you to achieve your goal but scaled up to half a lifetime puts that time frame in a much different perspective.

The old saying, “If at first you don’t succeed, Try, try. try again” (W. E. Hickson) doesn’t necessarily mean that you keep trying the same thing. One has to learn and adapt trying multiple approaches both in parallel and over a span of time.

Back to that puppy example. Below are among the approaches that my wife and I witnessed (perhaps endured is a better word) over the four year path of puppy persistence.

I’m sure I’ve missed a few things but you get the idea.  The net was cast pretty wide and no stone was left unturned (sorry for the mixed metaphors).

If your business could benefit from fractional CFO services, I would welcome the chance to speak with you.  Please give me a call at (314) 863-6637 or send an email to [email protected]   The archive of these monthly newsletters is posted at the Resources section of homza.com