Last year, I was traveling between St. Louis. MO and St. Paul, MN.  I loo 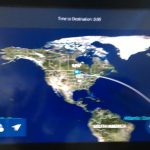 ked at the screen on the back of the seat in front of me and learned that I was somewhere off the coast of Africa. In fact, since my time to destination was zero, it appeared as though I had already landed in Africa. Now, clearly that was wrong and my initial thought was that I hoped that the navigation system the pilots were using was more accurate. But it triggered another thought. It reminded me that I rarely believe much of what I hear, read, or sometimes even see with my own eyes.

In a day and age when there is so much information available coming at us with such a frenetic pace, it’s more important than ever to vet it yourself, or at a minimum, to make sure that someone who you know and trust has done so.

I deal mostly with financial data but when trying to understand any data set, it’s important to keep in mind that it’s incredibly easy to download large amounts of data into a spreadsheet or to look at the number at the bottom of a multi-page report without ever digging into the detail to understand how it was compiled.  This is a poor practice and often leads to spurious conclusions.

Here are a few examples:

Whenever I see a report, hear a conclusion, or read the “headline” I almost always seek to learn more about the underlying data, how it was produced, and whether or not the inputs are valid. Does the data really support the conclusion or are there flaws in the data or methodology, that if corrected, would lead to a different answer?

Don’t take anything at face value – otherwise you’ll get off a plane believing that you’re in Africa when you’ve never left the United States.

If your business could benefit from fractional CFO services, I would welcome the chance to speak with you. Please give me a call at (314) 863-6637 or send an email to [email protected]

The archive of these monthly newsletters is posted at the Resources section of homza.com